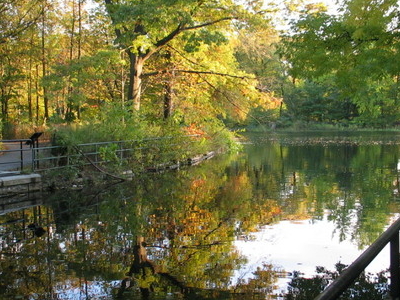 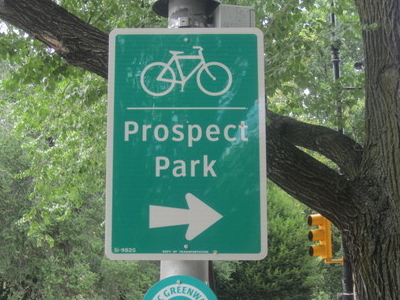 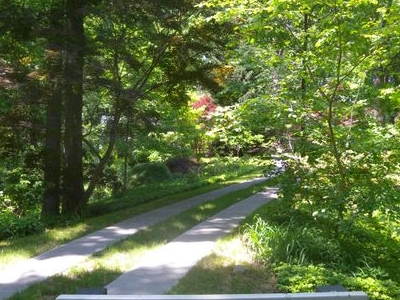 Prospect Park is a 585-acre (2.37 km2) (237 ha) public park in the New York City borough of Brooklyn located between Park Slope, Prospect-Lefferts Gardens, Kensington, Windsor Terrace and Flatbush Avenue, Grand Army Plaza and the Brooklyn Botanic Garden. It is run and operated by the New York City Department of Parks and Recreation and is part of the Brooklyn-Queens Greenway. The park was designed by Frederick Law Olmsted and Calvert Vaux after they completed Manhattan's Central Park.

Attractions include the Long Meadow, a 90-acre (36 ha) meadow, the Picnic House, which houses offices and a hall that can accommodate parties with up to 175 guests; Litchfield Villa, the pre-existing home of Edwin Clark Litchfield, an early developer of the neighborhood and a former owner of a southern section of the Park; Prospect Park Zoo; a large nature conservancy managed by the Wildlife Conservation Society; The Boathouse, housing a visitors center and the first urban Audubon Center; Brooklyn's only lake, covering 60 acres (24 ha); the Prospect Park Bandshell that hosts free outdoor concerts in the summertime.

The park also has sports facilities including seven baseball fields in the Long Meadow, and the Prospect Park Tennis Center, basketball courts, baseball fields, soccer fields, and the New York Pétanque Club in the Parade Ground. There is also a private Society of Friends cemetery on Quaker Hill near the ball fields, where actor Montgomery Clift is interred.

Recreation:
Seven baseball fields span 9th–15th Streets in the park. Two are major league-sized fields serving older age groups. The other five are slightly smaller, for younger children; typically 8–12 years old. The youngest children play on the grass. The Prospect Park Track Club, formed in the early 1970s, organizes regular training runs and races in and around the park. (The park has a 3.38-mile or 5.44 km loop.) The Prospect Park Women's Softball League has been playing softball games on summer evenings in Prospect Park for over 23 years. Circle rules football has been played every weekend from spring through fall at the tip of the Long Meadow nearest Grand Army Plaza since 2007. Horseback riders from Kensington stables are often seen on paths in the park. Pedalboating is open to the public on the lake. In the winter, ice skating, cross-country skiing and sledding are popular pastimes. A popular sledding hill is just inside the 10th Avenue entrance, off Prospect Park Southwest. The Bandshell hosts frequent concerts, most notably the "Celebrate Brooklyn!" Performing Arts Festival, a series of summer concerts founded in 1979 that draws performing artists from around the world.
Automobile Traffic vs. Recreation:
A perennial debate concerns the role of automobile traffic in the park. One side argues that if the ability of cars to use Prospect Park as a thoroughfare were reduced, traffic on either side of the park would be increased.[41] The other side argues that the park is designed to be a haven from the type of city stress that automobiles represent, and that having them use the park sacrifices the safety of those using the park for recreation. Current (2011) regulations state that automobile traffic is allowed to use the park only: northbound (Park Circle to Grand Army Plaza) from 7–9 a.m. and southbound (Grand Army Plaza to Park Circle) 5–7 p.m. on weekdays.
Parade Ground:
Olmsted and Vaux set aside a 40 acre rectangular area just south of Parkside Avenue to be used for sports and military drills. It was set apart from the main section of the park in fear that the high level of activity would damage the grass and plants and disrupt the park's pastoral feel. The military no longer uses the Parade Ground, but it is still one of the most active athletic fields in the city, encompassing the Prospect Park Tennis Center, four baseball diamonds, two softball fields, a football field, a soccer field, basketball and volleyball courts, the Paul Ricard Pétanque Court and three giant multi-use fields. 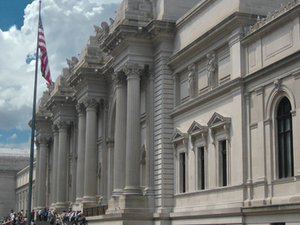 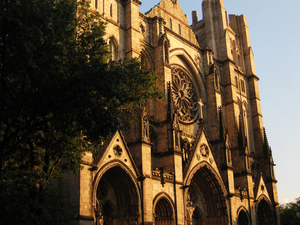 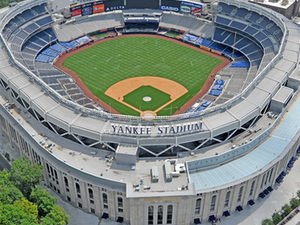 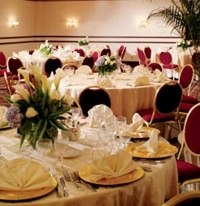 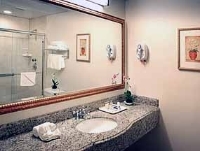 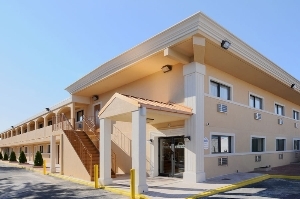