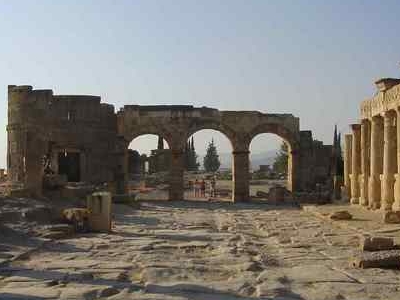 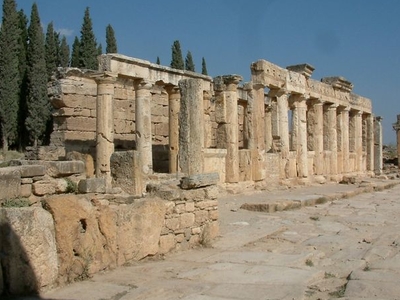 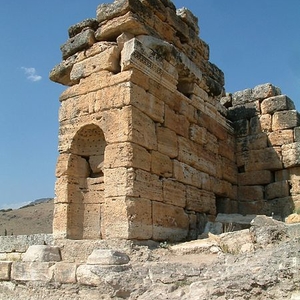 Hierapolis was an ancient Greco-Roman city in Phrygia located on hot springs in southwest Anatolia. Its ruins are adjacent to modern Pamukkale, Turkey. Hierapolis is a UNESCO World Heritage Site. The hot springs there have been used as a spa since the 2nd century BCE, and people came to soothe their ailments, with many of them retiring or dying here. The large necropolis is filled with sarcophagi, including the Sarcophagus of Marcus Aurelius Ammianos.
Part of the archeological site of Hierapolis

The great baths were constructed with huge stone blocks without the use of cement, and consisted of various closed or open sections linked together. There are deep niches in the inner section of the bath, library, gymnasium and other closed or open locations. The complex, which was constructed in the 2nd century BCE, constitutes a good example of vault type architecture. The complex is now an archaeological museum.

History
There are only a few historical facts known about the origin of the city. No traces of the presence of Hittites or Persians have been found. The Phrygians built a temple (a hieron) probably in the first half of the 3rd century BCE. This temple would later form the centre of Hierapolis.

Significant structures
The Hellenistic city was built with streets running parallel or perpendicular to the main street. This main street ran from north to south close to a cliff with the travertine terraces. It was about 1,500 metres (4,900 ft) long, 13.5 metres (44 ft) wide and was bordered on both sides by an arcade. At both ends of the main street there was a monumental gate, flanked by square towers built of massive blocks of stone.

Theatre
The first theatre was constructed to the northeast above the northern gate, when the ancient city was destroyed by earthquake in 17 CE. After the earthquake of 60 CE and during the reign of emperor Titus Flavius Vespasianus, a new theatre was hollowed out of the slope of the hill further to the east, using the remains and the seats of the old theatre. There were alterations during the reign of emperors Hadrian and Septimius Severus.

Temple of Apollo
A temple was raised to Apollo Lairbenos, the principal god of Hierapolis, during the Hellenistic period (as can be seen on coins from Hierapolis). Apollo was linked to the ancient Anatolian sungod Lairbenos and the god of oracles Kareios. But ancient worship also centered on Cybele, Artemis, Pluto and Poseidon.

Plutonium
Next to this temple, within the sacred area, is the oldest local sanctuary, called the Plutonium (in Greek Πλουτωνειον = "the place of Pluto") or Chronion (named after Cronus), or Charonion (named after Charon), a shrine to the god of the underworld. The Plutonium was described by several ancient writers including Strabo, Cassius Dio, and Damascius. It is a small cave, just large enough for one person to enter through a fenced entrance, beyond which stairs go down, and from which emerges suffocating carbon dioxide gas caused by underground geologic activity.

Museum
The Roman Bath, one of the biggest buildings of Hierapolis antique city, has been used as the site of the Hierapolis Archaeology Museum since 1984. In this museum, alongside the historical artifacts which were found in Hierapolis, there are some artifacts from Laodiceia, Colossae, Tripolis, Attuda and other towns of the Lycos (Çürüksu) valley. In addition to these, the museum has a large section devoted to artifacts found at Beycesultan Hüyük and which includes some of the most beautiful examples of Bronze Age craft. 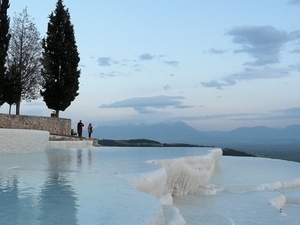 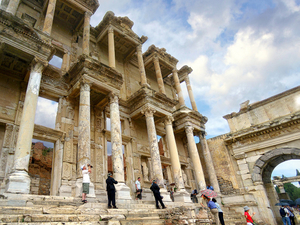 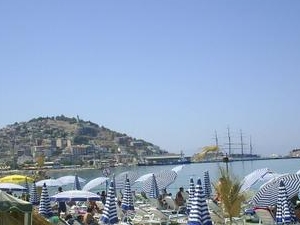 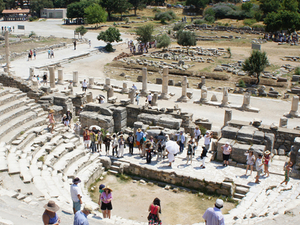 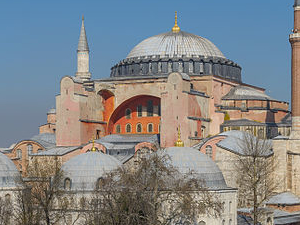 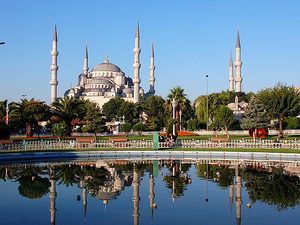 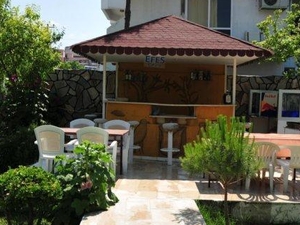 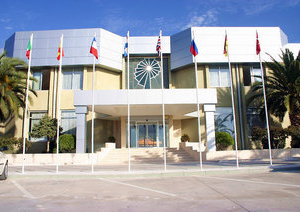 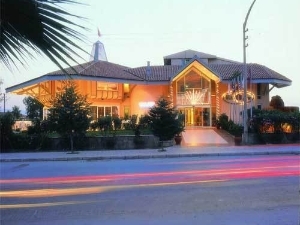