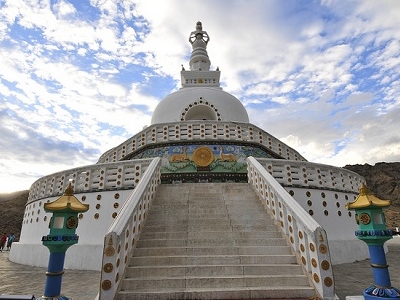 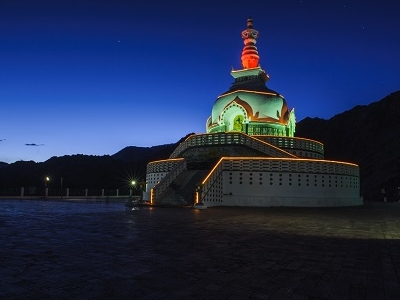 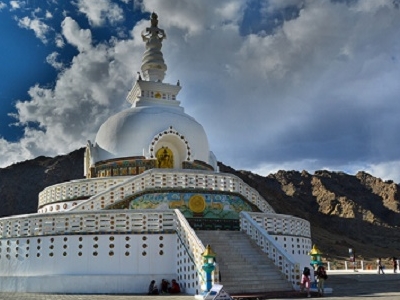 Shanti Stupa is a Buddhist white-domed stupa (chorten) on a hilltop in Chanspa, Leh district, Ladakh, in the north Indian state of Jammu and Kashmir. It was built in 1991 by Japanese Buddhist Bhikshu Gyomyo Nakamura . The Shanti Stupa holds the relics of the Buddha at its base, enshrined by the 14th Dalai Lama himself . The stupa has become a tourist attraction not only due to its religious significance but also due to its location which provides panoramic views of the surrounding landscape.

Description and Significance:
The Shanti Stupa features the photograph of the current Dalai Lama with the relics of the Buddha at its base.The stupa is built as a two-level structure. The first level features the central relief of Dharmacakra with deer on each side. A central golden Buddha image sits on a platform depicting the "turning wheel of Dharma" (Dharmacakra).

The second level has reliefs depicting the "birth" of Buddha, the death of Buddha (mahanirvana) and Buddha "defeating the devils" while meditating.Both levels feature a series of smaller meditating Buddha reliefs.The Shanti Stupa was built to promote world peace and prosperity and to commemorate 2500 years of Buddhism. It is considered a symbol of the ties between the people of Japan and Ladakh.

Tourist Attraction:
Since its inauguration, Shanti Stupa has become a popular tourist attraction. According to The Hindu it is the "most famous tourist attraction" around Leh, though its architectural style is different from the Ladakhi style. The Shanti Stupa overlooks the city of Leh, providing panoramic views of the city, the village of Changspa, Namgyal Tsemo in the distance and the surrounding mountains.Sunrise and sunset are considered to provide the best views from Shanti Stupa.The stupa is illuminated with lights at night.The stupa is open for tourists between 5:00 a.m. and 9:00 p.m.

Access :
Situated at a height of 4,267 metres (13,999 ft),the stupa is located 5 kilometres (3.1 mi) from Leh - the former capital of Ladakh - on a steep hill facing the Leh Palace.The stupa can be reached by a drivable road or on foot using a series of 500 steep steps to the hilltop. 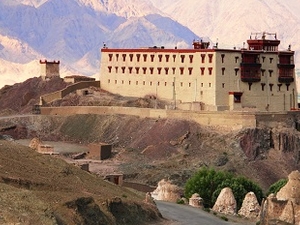 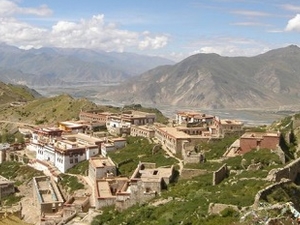 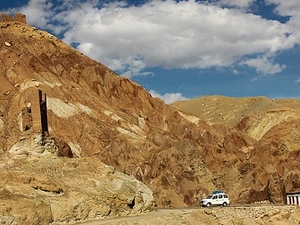 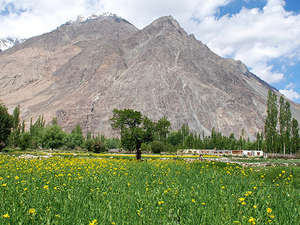 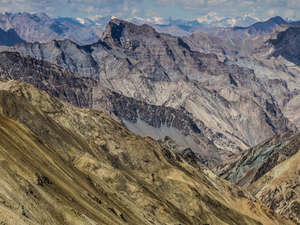 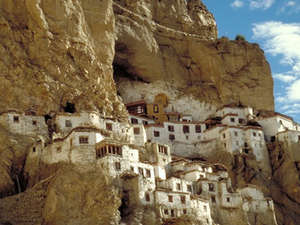 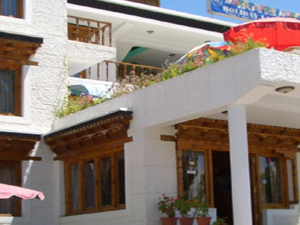 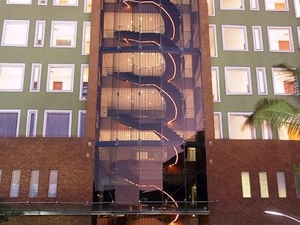 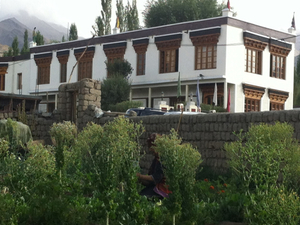