This tour basically concentrates on the Northern part of Namibia ,including Etosha national park and the beautiful landscape of the Damaraland.

Presupuesto
Day 1:
Your Tour Guide will pick you up at your accommodation and travelling north, you pass through some of the country’s best established commercial farmland and stop at quaint towns along the way. Arriving at the Waterberg Platue. The plateau and the National park are named after the prominent table mountain that rises from the plateau. The Waterberg Plateau National Park is ecologically diverse and rich and has over 200 different species of bird with some rare species of small antelope on the lower hills of the mountain. On arrival guest will be accompanied by the Guide on a Hike to the top of the Platue.
Waterberg Platue Park

Day 2:
We depart from one National Park to the next Etosha National Park. Travelling north, you pass through some of the country’s best established commercial farmland and stop at quaint towns along the way, arriving at Anderson Gate by mid-afternoon. After entering Etosha we game drive our way through to Okaukuejo, Etosha’s main rest camp and resort where we will check in and set up camp. Originally the site of a German fort built in 1901, Okaukuejo now houses the Etosha Ecological Institute, founded in 1974; the round watchtower is a remnant of the fort..
Okaukuejo camp

Day 3:
A full day’s worth of game driving awaits and we leave early to enjoy the cool morning air, making our way to Halali camp, situated in the middle of the park. Along the way we visit several waterholes and are afforded splendid views of the massive Etosha Pan, a shallow depression that is dry for the greater part of the year, but fed by moisture from perennial springs on the fringes. The pan covers about 25 percent of the park. The game viewing is excellent throughout the year and we have the chance to spot a few new species that are not normally seen on the Okaukuejo side of the park.
We stop at Halali camp for a rest and a leisurely lunch and there is time to visit the waterhole and to make use of the swimming pool and bar facilities before continuing to the eastern side of the park and our camp next to Fort Namutoni.
Namutoni Camp

Day 4:
We leave the camp by traveling towards the Antoni and King Nehale gate. Than heading straight onto the main road. We will be driving through very interesting little huts of the Ovambo Tribe, which is the tribe that dominates the northern part of Namibia. The Ovambo people, also called Aawambo, Ambo, Aawambo (Ndonga) or Ovawambo (Kwanyama), are a Southern African tribal ethnic group. They are the largest ethnic group of Namibia, found in its northern regions and more often called Ovambo. On arrival, guest can have leisure time and enjoy the sunset.
Ruacana Eha Rest Camp

Day 5:
After breakfast we will be joining a local guide to the Ruacana Falls. Ruacana Falls are waterfalls located near Ruacana on the Kunene River in Northern Namibia. The waterfall is 120 meters (390 ft) high and 700 meters (2,300 ft) wide in full flood. It is among the largest waterfalls in Africa, both by volume and width.
In the Afternoon we will again join the local guide on yet another create visit to the Himba tribe. The OvaHimba are a semi-nomadic, pastoral people, culturally distinguishable from the Herero people in northern Namibia and southern Angola, and speak OtjiHimba (a Herero language dialect), which belongs to the language family of the Bantu. The OvaHimba are considered the last (semi-) nomadic people of Namibia.
Ruacana Rest Camp

Day 6:
We prepare our self for a 4 hour breath taking scenic drive to the next lodge. On arrival guest the guest can enjoy the rest of the day leisure . Grootberg Lodge is perched on the rim of a plateau and stands sentinel over the Klip River Valley. Grootberg Lodge is a landmark in Namibia's tourism industry. It is the first middle-market establishment in the country that is 100% owned by the conservancy. The European Union funded the project, through the Ministry of Environment and Tourism's Development Programme.
Grootberg Lodge

Day 7:
Departure is at 7.00am after an early breakfast at the lodge. The guide, along with the game trackers will take the guests in an open 4x4 game vehicle down to the Klip River. They will track the rhinos from the vehicle using telemetry as transmitters have been inserted into the animals' horns for monitoring purposes. Part of the tracking will take place on foot, with the possibility of between 1 to 3 hours walk at the most. At lunch time there will be a stop near the springs where people can enjoy some refreshments. It's almost a full day activity going along bumpy roads and walking in rocky terrain, so not advisable for the faint-hearted.
Grootberg Lodge

Day 8:
We depart early in the morning as this is going to be a long drive ,but yet very beautiful scenery along the Skeleton coast to the Cape cross, where we will stop to see the Cape seals, before we continue to Swakopmund for a relaxing 2 days. Cape Cross is a protected area owned by the government of Namibia under the name Cape Cross Seal Reserve. The reserve is the home of one of the largest colonies of Cape fur seals in the world.
Prinzessin Hotel or similar

Day 9:
Today is a easy going day, guest can join activities offered by the Desert Explores or simply just explore the beautiful city of Swakopmund. Swakopmund (German for "Mouth of the Swakop") is a city on the coast of western Namibia, The town has 44,725 inhabitants and covers 193 square kilometres (75 sq mi) of land. The city is situated in the Namib Desert and is the fourth largest population centre in Namibia. Swakopmund is a beach resort and an example of German colonial architecture. It was founded in 1892 as the main harbor for German South-West Africa, and a small part of its population is still German-speaking today.
Prinzessin Hotel or similar

Day 10:
From the coast we travel further inland towards the Spitzkope is a group of bald granite peaks or inselberg. The granite is more than 120 million years old and the highest outcrop rises about 1,784 metres (5,853 ft) above sea level. The peaks stand out dramatically from the flat surrounding plains. The highest peak is about 700 m (2,300 ft) above the floor of the desert below. A minor peak – the Little Spitzkoppe – lies nearby at an elevation of 1,584 m (5,197 ft). Other prominences stretch out into a range known as the Pontok Mountains. On arrival the guest will be joining a local guide on a guided walk to see the Bushmen paintings in the rocks in the Spitzkoppe area.
Spitzkoppe rest camp 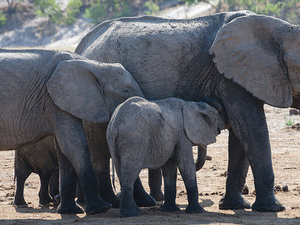 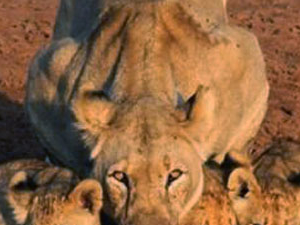 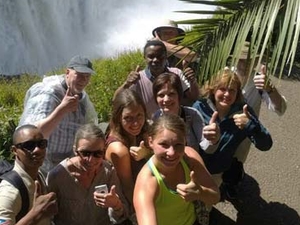 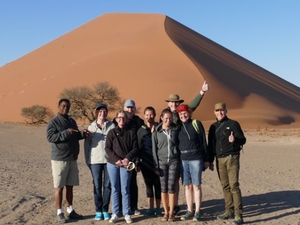 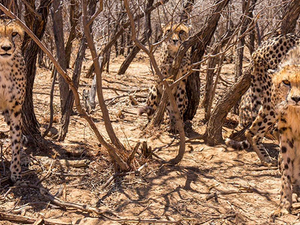 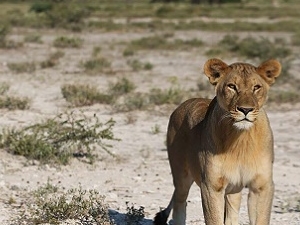